We, Dreamers are a new company founded in 2009. Our main line of work includes building web portal, SNS apps , and blog widgets.

As other entrepreneurs are still trying to copy ideas from the States to Taiwan, we surface enticing ideas and work on bringing them to the western world. Web 2.0 has been superb and praised significantly in the past few years. Although some people consider it overrated, we still believe it has its own business module more than just counting on the frequent page views for advertising. Besides, we simply crave to create superb, practical websites and share with the world!!! ☺

Raised in a strict family, his childhood was disciplined in a stringent atmosphere. His words were terse before age 13. He had purchased his first motorbike and scored an official girlfriend by the age of 15. Until high school, he was required to study a painstaking fourteen hours a day.

He has always had the rebellious spirit deep in his soul, always wanting to challenge the existing rules. At age 17, he was suspended from high school and driven away to Melbourne, Australia. The young explorer landed his first car at age 18, for the price of $2000. By age 21, he had dropped out of college. He continued by serving in the army as a financial officer of the brigade, and completed service by age 22. At age 23 a career began when he became a mechanical engineer, and he became the chief mechanical engineer of a plastic-injection machinery corporation by age 24. Soon he was known as the hottest engineer in the industry with a 19-year-old heart in a 25-year-old body.

Lavishly, the guy decorates with playboy exterior but fragile interior. He looks like a player but he is a prayer;lay with countless girls and fallen in love with five of them. Cheated? Yes, once. However he’s been cheated as well. What is the most romantic, passionate thing he’s done for his girlfriend? How about igniting fireworks, strumming the guitar while singing her birthday song? 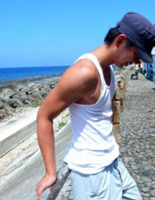 Everyone was once a kid and had tons of dreams;dream to be an actor, dream to be a pilot or even dream to be the president. However, do you still remember the little but passionate dream you used to have when you were 6 years old?

When life becomes a struggle and reality breathes down your neck with nowhere to breathe, all you can do is just taking all these grievances and swallow them down. Life becomes 10 insipid hours of work a day just for feeding your family;it is nothing but a torture of repetition.

I was a chief mechanical engineer of a plastic-injection machinery corporation. I used to work 12 hours a day in average just to make a slightly higher salary than the average Taiwanese Joe. One day I woke up and realized my life was fading and it freaked me out. I will be living a life of repetition doing exactly the same thing I had been doing everyday if I don’t make a change. I felt like a living corpse. Where did all my dreams go? So I took a brave step just like the famous Dancing Matt. I quit my job;took a long vacation for 6 months in search of what I really wanted to do. Being a heavy internet user, and a creative person, I found that sometimes I came up with some cooler and better ideas than the already bountiful cool things and useful tools on the web. So I figured, “ Why not do this for my job? ” Maybe I can be as lucky as Kyle MacDonald who traded one red paperclip for a house. That’s the power of internet that no other else can give. Therefore I did an insightful research and analysis. I decided to follow my dreams and establish this firm.

However, I totally understand that dreaming is not going to make you rich and feed your family, and I am not an unrealistic dreamer. The dream I have is based on the reality and is possible to make it comes true. I’ve always liked the line in the movie Forrest Gump. “ Life is like a box of chocolates;you never know what you're gonna get. ” Instead of sitting here wondering if it is worth taking the risk, I’ve chosen to give myself a chance so that I won’t have any regrets. All it needs is just a little bit of adventurous spirit and a further step. So, if you feel the way I feel, simply join us and begin your adventure!

Feel free to contact us if you have any question.